Minutes of the IRGO business meeting held on 28th August 2017, during the 18th International Symposium on Ostracoda (ISO18), in Santa Barbara, California, USA.

At 17:05, the Chair opens the session, presents the agenda and conducts the meeting. The Past Chair takes the minutes.

1- Welcome
The chair welcomed the delegates and thanked the IRGO steering committee members for their collaboration during the past four years. He then explained the history, aims and functions of both, IRGO (International Research Group on Ostracoda) and SF*IRGO (Society of friends of IRGO) to the young colleagues who attended an IRGO business meeting for the first time. He made clear that everybody working with ostracods is part of IRGO and everybody attending an International Symposium on Ostracoda should attend the IRGO business meeting. He also explains that SF*IRGO was founded to enable IRGO to carry out financial transactions.

Refunds from the ISO18 organizers will be directed to SF*IRGO, which holds the funds of IRGO. Since SF*IRGO can be seen as the financial department of IRGO, the Chair suggests to determine that the chair of SF*IRGO shall automatically be appointed Treasurer of IRGO to increase the interconnection between the two boards. He put this suggestion to vote and it was accepted unanimously. From now on, the chair of SF*IRGO will at the same time function as the treasurer of IRGO.

- A memorandum of understanding between IRGO and SF*IRGO has been signed.

- IRGO has now the domain ‘ostracoda.net’ for its website, funded by SF*IRGO. The websites of both are being maintained by the Chair and Past Chair, Finn Viehberg and Renate Matzke-Karasz respectively.

- an ostracod wiki has been set up as suggested on Ostracon (but not used at all).

- Gabriela Cusminsky (member of the scientific advisor board of SF*IRGO) attended the IPA business meeting in Mendoza to represent IRGO; kind thanks go to Gabriela.

- affiliations with TCS, TMS, and IPA have been maintained.

- a yearly training school on Ostracoda (ESO in Jena, hosted by Peter Frenzel) has been installed, which generates funds for SF*IRGO ipso facto IRGO.

Sylvie Crasquin, host of the upcoming 5th International Palaeontological Congress in Paris, reported on the preparations and plans. IPC5 will run under the title ‘The Fossil Week’ (reminding of the The Fashion Week in Paris), will run in ten parallel sessions and will welcome around 1500 attendants. Announcement of early bird registration can be expected later this year with fees around 350 Euro.

Robin Smith reported on the 4th Asian Ostracod Meeting, which will be hosted by Takahiro Kamiya at the University of Kanasawa, Japan. The organizers invite not only Asian, but all international ostracodologists to join this meeting from 6. to 10.8.2018.

Tadeuz Namiotko, host of EOM9 (to take place 2019 in Gdansk) told the audience that the meeting will most probably be held during the month of August. He will announce more detailed information in the first half of 2018.

8- ISO19 venue
Two propositions were made by presenting spectacular and informative talks:

9- Miscellanea
- The Past Chair announced that the production of 3D ostracod prints and 2018 ostracod calendars has already contributed to the funds of IRGO; everybody is invited to order more of these items through the SF*IRGO shop after the conference.

- Elsa Gliozzi announced that she brought spare copies of the Micropaleontology volume containing publications from the ISO17 meeting.

- Alan Lord announced The Micropalaeontological Society special offers to mark ISO 2017. Journal of Micropalaeontology, 36 part 1, January 2017, is a special issue devoted to Cyprideis torosa (Jones) and the contents list can be seen via The Lyell Collection; copies are available at the reduced price of GBP17/US$20* (plus shipment). The book 'Ostracods in British Stratigraphy' (2009) is also available at the reduced price of GBP20/US$24* (plus shipment) and provides an overview of ostracod evolution of interest and relevance beyond NW Europe. Place orders via www.geolsoc.org.uk/catalogues (scroll to bottom of page and download form) citing 'ISO 18' on the form.

Also, to mark ISO18 and the achievements of Robin Whatley, who died last year, all his papers published in 'Journal of Micropalaeontology' are freely available for the next month via the Lyell Collection

- In his role as CYPRIS editor, the Chair explained that he has recently been overloaded with tasks making it impossible to finish CYPRIS Vol. 31 and asked for understanding. After a discussion among the plenum on possible changes in CYPRIS (e.g. to remove the chapter on new publications, or omit the address list, since this information can be found online) it became clear that the community would rather leave this important newsletter as it has been for years. The possibility of re-installing regional correspondents to collect the members’ contribution would be favourable, but no final conclusion could as yet be drawn on this behalf. However, Brandon Curry volunteered to help the CYPRIS editor with editing the coming volumes.

Elly Browers, former CYPRIS editor, volunteered after the business meeting to be part of the editorial team, too.)

10- Awards
- the first award was to acknowledge a special anniversary. Alan Lord was honoured at the occasion of 50 years between the first ISO he attended (ISO2 in1967) and the current ISO18. Dave Horne gave a laudation of the exceptional influence and impact Alan Lord had on the art of organizing and creating successful meetings for the community of ostracodologists. Alan was awarded a metal print of a commemorative plate designed for him.

- the Past Chair then re-introduced an old, forgotten award: the Order of the Amphidont Hinge. This award has been given to Drs J. Neale and H. Oertli during ISO12 (1994) in Prague for their lifetime achievements, but has ever since not been used to honour any other ostracodologists. The knowledge about this prize seemingly has gone lost.

However, the SF*IRGO and IRGO board has decided to revive this award and to give it to senior colleagues, who not only made exceptional scientific contributions, but who also invested work and time to facilitate the scientific work of all members of our community.

- the first new Order of the Amphidont Hinge was given to late Eugen K. Kempf. The Past Chair gave a laudation, mentioning Eugen Kempf’s exceptional contribution to our scientific field by creating the Kempf Database on Ostracoda. As second chair of SF*IRGO, late Eugen Kempf also fostered the idea of awarding senior community members and the IRGO committee would have appreciated to give this award to him in person, but sadly fate decided otherwise. 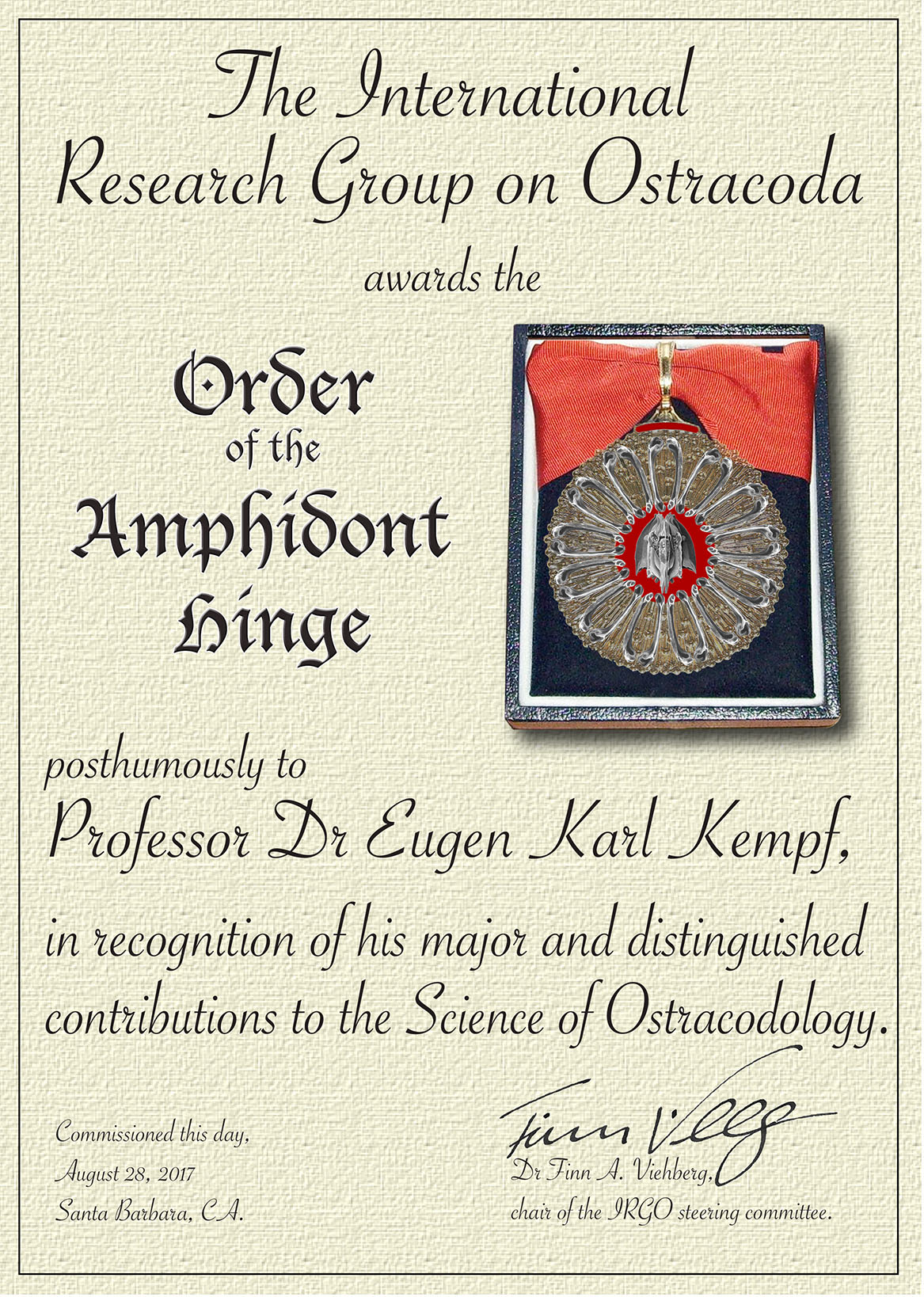 - the second Order of the Amphidont Hinge was given to Rosalie Maddocks (Houston). Unfortunately, although originally planned, hurricane ‘Harvey’ made it impossible for Rosalie Maddocks to come to ISO18. The Chair gave a laudation for Rosalie Maddocks, highlighting her invaluable work as a treasurer for IRGO, but foremost her visionary idea to create OSTRACON (17 years ago), which is up to date our most important tool for fast communication with our fellow ostracodologists. Rosalie was awarded a metal print of a commemorative plate depicting the Order of the Amphidont Hinge.

- the third Order of the Amphidont Hinge was given to Elly Brouwers (Chicago). Tom Cronin gave a laudation for Elly Brouwers, highlighting her incredible work as an editor for CYPRIS, which she carried out for more than 20 years. CYPRIS was and still is an important platform for information exchange between ostracod workers, as well as a valuable source of historical information. Elly was awarded a metal print of a commemorative plate depicting the Order of the Amphidont Hinge.

Three more awards were granted after the IRGO business meeting.

The Sylvester-Bradley Award for the best student presentation was granted to Anna Jöst for her impeccable talk on Deep-sea ostracod diversity and faunal distribution in the sub-polar North Atlantic. (200 Euro endowed by The Micropalaeontologica Society).

The Sylvester-Bradley Award for the best student poster was granted to Yuki Fujihara et al. for their poster on Palaeoenvironmental changes in Suwa Bay, Oki Islands, Japan during Holocene recorded by ostracod assemblages. (100 Euro endowed by IRGO)

The Best Poster of All- award was granted to Toshiaki Irizuki et al. for their poster on Temporal changes of the southwestern Japanese ostracod faunas with relation to the Miocene formation and development of the Sea of Japan. (100 Euro endowed by SF*IRGO)

11- Next IRGO Officers
The Chair first pointed out that there was no response to the call for suggestions and volunteers for positions within the IRGO steering committee.

12- Acknowledgements and adjournment
The now Past-Chair expressed sincere gratitude to all those involved in the organization of ISO18, especially Todd Oakley, for the excellent conference held in Santa Barbara and closed the session at 19:05. The meeting was closed by the new Chair Moriaki Yasuhara.